We use cookies on our website. They help us get to know you a little and how you use our website. This helps us provide a more valuable and tailored experience for you and others.

You can revoke cookies at anytime at the bottom of the page.

Suzuki Motor Corporation has announced its exhibits for the 44th Tokyo Motor Show 2015 (organized by the Japan Automobile Manufacturers Association), which will be open to the public from 30 October to 8 November.

The theme for Suzuki’s booth is "SUZUKI NEXT 100". Suzuki will be celebrating its 100th anniversary in 2020, so the exhibits represent proposals for products and technologies that give a sense of the company’s preparations for ongoing success in the next 100 years.

A range of concept models will show how Suzuki can deliver wonder and enjoyment to drivers and riders. The concept cars will include the IGNIS, which gives shape to Suzuki’s foray into the new compact-crossover genre; and the MIGHTY DECK, which offers new kinds of fun in the minicar segment. The concept motorcycles will include the HUSTLER SCOOT, a scooter that expands the enjoyment people can have on two wheels.

The booth will also highlight Suzuki’s latest production models—including the new ESCUDO sport utility vehicle (called the new Vitara in markets outside Japan), which the company plans to launch on 15 October (in Japan). Other highlights will include technology exhibits such as cutaway models of newly developed engines.

• The MIGHTY DECK is a new, fun-oriented minicar with a canvas top and an open load deck that can be repositioned for diverse purposes.

• An "urban/outdoor" concept is embodied by features that free people to move between contrasting situations and mindsets: city and nature; home and away; work and leisure; relaxed and playful.

• Wide-ranging functionality including an automatic raise/lower function for the open deck accommodates lifestyle situations ranging from daily life to leisure.

• The Air Triser is a new-concept three-row compact minivan. Within manageable body dimensions, it offers a cabin where roominess and smart seat configurability embody the concept of a private lounge.

• The extent to which the Air Triser enables users to enjoy their time together not only on the move but also while they’re stationary makes it unprecedented among minivans.

• The IGNIS shows how a compact car can straddle the boundary between daily life and leisure. A high eye point and plenty of road clearance ensure day-to-day convenience. They also allow confident driving on snowy roads and rough tracks, so weekends become a chance to enjoy the great outdoors.

• A compact, visually striking body and a simple, highly practical interior design highlight the IGNIS’s credentials in the compact-crossover genre.

• The IGNIS-Trail Concept expands upon the IGNIS concept of urban and outdoor versatility by offering even greater rough-road ruggedness.

• Big-diameter wheels and bold wheel-arch mouldings are included in a design package that heightens compact-crossover enjoyment by emphasizing the IGNIS-Trail Concept’s outdoor credentials.

• The Baleno is an all-new B-segment hatchback in which Suzuki refined the styling, performance, fuel economy, and practicality expected of a compact car and brought them together in an outstanding new way.

• Plenty of space for passengers and luggage means four adults can enjoy long journeys in comfort even when they’re carrying a full complement of gear.

• The new ESCUDO (called the new Vitara in markets outside Japan) is an evolution of Suzuki’s latest compact SUV. It carries forward the 4WD and SUV excellence that Suzuki has nurtured over the years in the Jimny and Vitara. Plus, it embodies advances that meet diverse contemporary needs.

• The new model is based on packaging that allows distinctive styling and great rough-road performance (a kind of packaging that Suzuki has carried forward since the first-generation Vitara). Plus, it offers advanced safety technologies and outstanding fuel economy.

Planned number of automobiles in booth: 22

HUSTLER SCOOT: easy to ride; a versatile luggage carrier; the fun kind of scooter that ought to exist

• The HUSTLER SCOOT is a concept model of a rider-friendly 50cc scooter with luggage space for diverse purposes.

• A conventional underseat luggage bay is complemented by a removable, carryable luggage case that mounts between the rider’s feet. There’s more room for luggage on the rear carrier and on the sides of the bodywork.

• With the luggage case removed, the HUSTLER SCOOT can carry longer luggage items such as a tennis racket.

concept GSX: a concept object that encapsulates the potential of the GSX series

• Suzuki’s powerful, rider-friendly inline-four engines deliver an outstanding combination of fuel economy and endurance. Their technologies are reflected in numerous GSX-series models including the GSX-R1000, the Hayabusa, and the GSX-S1000.

• The concept GSX symbolizes the high-performance bikes that bear the GSX name. It gives form to Suzuki’s inline-four sportbike-making spirit and evokes a cocoon from which the company’s future sportbike models will be born.

Planned number of motorcycles in booth: 12 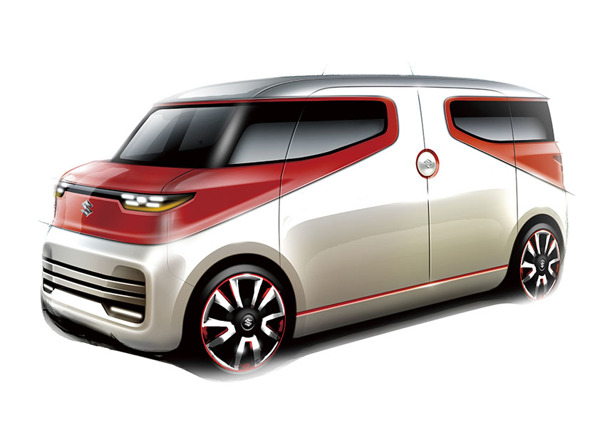